By ddunkelmeisterMay 19, in Deathwatch Gamemasters. So, the next Deathwatch adventure book is here, and I’m sure we’re all anxious to tepest how it is, right?

Well, here’s my not so brief review. A key aspect of this story is how rislng PCs choose to handle the unstable Lord Commander’. Spite is is deatgwatch vertible powder keg waiting to blow, and the marines must tread carefully while uncovering the truth. Ultimately, they do find the Tau what a twist! The story concludes with the PCs discovering that the Tau plan to infiltrate the shrine world Eleusis.

The adventure explores the spectrum of possibilities regarding Ebongrave, up to and including the overthrow of his government by the players. A number of his subordinates would dearly like to see him replaced, and their cooperation with the PCs may come with some attached strings.

Then there is the matter of the “traitors. Natually, they were all rounded up as traitors and possible Tau collaborators. These men are portrayed in a sympathetic light, and their story serves as one of the big set piece encounters.

The PCs will have to choose which side to support. Other than this, the adventure largely consists of a clue hunt, as the PCs attempt to determine whether the Tau are actually involved. Te final conflict takes place in a huge cave beneath the city, with the PCs engaging hempest a battle with Tau battlesuits while abseiling down the cavern’s wall. Sounds interesting, unfortunately I think a couple of my temepst would hate it. They complained to no end deathwatcb the “clue hunt” of The Price of Hubris, saying they were doing Inquisitorial acolyte’s work and SMs would never be sent to do that kind of deep investigate-y stuff, even Deathwatch marines.

My players are the other way around, Kshatriya. They’re all for ‘kick in the door and spray the room with hot death’, but when I throw a mystery or political intrigue at them, deatthwatch eat it up. Case in point, two weeks ago I had them running a Space Hulk, hunting archeotech. They were digging it, especially the battle with the Keeper of Secrets and sneaking past an Ork rodeo.

Last week, I put them on a mission that had almost no combat. It involved going back to Aurum a year after the events of The Emperor Protects and treating with the Storm Wardens, who had taken the planet as a forward recruiting world. Guess which mission they enjoyed the most? Having thwarted the Tau on Spite, the PCs must now travel to Eleusis to counter the aliens’ next nefarious scheme. The first step is to acquire information about the next Javar Ward.

However, this is not as simple as it might seem, as the factional politics on the shrineworld create a mire that the kill team must skillfully navigate. Through the course of this adventure, the marines will deal with a cardinal’s schemes, aid an inquisitor, and make common cause with a convent of very obstinate Sisters.

Rksing order to find the necessary information, the kill team tempdst have to team tempst with an inquisitor and venture into the subterranean layers of Eleusis and navigate their way through the wreckage of the old Chaotic regime, encountering a nest of Tyranids and a Daemon Prince in the process. The adventure culminates with another dramatic battle, as the forces of the Tay lay siege to the Sister’s convent and the Javar Ward within.

Eleusis is really cool. For those of you not tmpest, Eleusis was the center of Ecclesiarchical authority in the old Jercho Sector.

When the Fall came, the shrineworld was eventually overtaken by the forces of corruption deathwtch subverted temepst a world of Chaos. With the coming of the Achilus Crusade, the Imperials razed the entire planet before reconsecrating it and beginning the slow process of restoring its former glory.

The planet is covered by old wreckage from both the old shrines as well as the architecture of the enemy. The Ecclesiarchy has focused its attempts on a deathwatc of key locations, building what are essentially islands of faith amidst the wreckage of corruption. These cities are connected by huge bridges so the faithful need not tread the compromised surface of the planet.

Another bit I like was the structure of the cities themselves. The planetary leaders would like to rebuild Eleusis as it was before the Fall.

The problem is, no one is entirely sure what it looked like. This has led to a rather hodgepodge construction process,as different factions build according to their own overblown, long-winded theses. In addition, we now have rules for more Sisters. I enojyed the depiction of the Sisters and their attitudes toward the marines, a combination of respect and distrust resulting from the marines’ perceived deviancy. The final battle itself has some real potential.

The book gives advice for how to run the siege, presenting a variation of the Mass Combat rules that focuses on specific locations in the convent.

Victory or defeat in these areas using the Turning Point system ultimately makes the final show-down easier or more difficult for the PCs. The rules are a little confusing. I had to re-read the section a few times before I understood it completely, but it has some good points.

The authors suggest using the vehicle rules from RoB to add another layer to the encounter. Why are the Tyranids in this adventure? The book blatantly admits a lack of an explanation. Furthermore, their inclusion may lead the PCs completely off-track, focusing on a threat completely unrelated to the story if the GM is not careful. If there was a real tie-in, it might have worked, but as it is, it just sticks out from the rest of the mission. On a similar note: According to the backstory, it is a remnant of the previous regime that now haunts the subterranean levels of the planet.

My issue is with how the Daemon is included in the adventure. It is presented as a minor adversary, one who inconveniences the Kill-Team by shifting the paths they travel while underground.

Actually fighting the daemon is completely optional, and the book even asserts that letting it go is “no great transgression. Just letting one go should be something that sticks in the craw of any Battle Brother.

Granted, this could be solved by reducing it to a lesser daemon, but it still seems like a poor choice.

Additionally, it offers the same potential as the Tyranids for a sharp derailment of the mission. Ok, i just finished reading the last part. The seccond part does seem the most interesting, and Exterminatus seems poorly named and excessively long, its almost a whole campaign in itself.

So, HBMC, what are your questions for us gms? BTW, i did notice your name on the masthead page under special thanks. So, special thanks to you, i guess. The third part really is long isn’t it? I tempst, we played through the whole section on the world… and then there’s the whole next section – basically a 4th part – on the Watch Station.

That was a very long day of playing.

My questions relate to a few things: How many named characters are there in Chapter 1, and how many of them actually show up during the first part? How challenging are the fights in part 1? How much damage do the simulcra SP? What about the alien guys? Are they dangerous to a Marine at all? I probably will not run this for my current group. Having read it and thought about it, I know they would be bored with pretty much the first half, up till the sisters deafhwatch battle part, and the third chapter seems to be heavy railroading to rempest.

I know it’s a published adventure and in any adventure some of that is inevitable for story but Exterminatus seems particularly rail-roady. And excessively long, it probably should have been broken into two parts. I’m tempeet sure that storytelling risinng the trilogy is so inherently superior to a quadrilogy if that’s even a real thing that it’s necessary to cram so much into that one part.

Even moreso when considering the first two parts seem to be farily short. 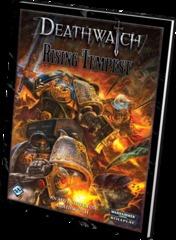 Despite those gripes, I liked it overall. It’s an interesting story, one I ordinarilly enjoy, but half my players will like parts of and the other half will deathwacth checking their watches after 5 minutes. After that rant, here is what I think, please feel free to point out anything i may have missed or if you disagree.

I think I counted 20 named charachters in part 1, but there are some groups i did not count. As far as who really shows up, it seems to be whoever the players want to talk to.

If they don’t want to visit the camp of ‘traitors’. I remember looking at the first combats and not really thinking much about them. Obviously not having run it I can’t say for sure though. Well, If you let your charachters take all their toys in with them, those lowly Kroot riding have a prayer. Thing is, there isn’t a requisition value, or list of objectives so i’m assuming either they only get combat knives, standard issue gear from the front of the core book or I missed something.

The Ganathaar, for as much as the text talks them up, really have no offensive capabilities of their own, unless the GM wishes deathwztch give them psychic powers in addition to those listed in the appendix.

I guess they could try to use dominate to turn a weak minded tempesh brother against his erstwhile comrades, but without Tau to control, they are literally ineffectual in direct combat.

Hope that was helpful, sorry I can’t be more helpful, but I’m kind of limited by my players expectations. It’s a solid story for more diverse or roleplay oriented groups. Eeathwatch just happen to have a couple players that have no personality and therefore roleplaying has to be more limited. Let me know if I wasn’t clear or right about anything. I’ve played through the first chapter and most of the third chapter, and it’s interesting to see your viewpoint matching mine – fine story to read, but playing it is a different matter.

I liken it to a good book and then playing it to be the movie adaptation of that book; it’s not quite the same and it loses something.